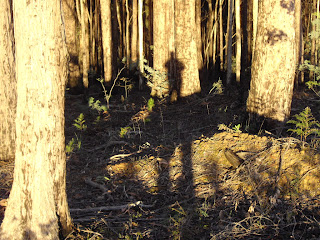 The Art of Confronting the Beasty

Last Sunday morning, a soft gentle sunny day, so typical of this time of year around here, I was confronted by a snake.

"Was it a big one"? You may ask. Every snake who surprises you is big. This one was.

Stepping outside my studio for a breath of fresh air, there it was, basking its magical geometry in the mid-morning sun only just outside my door.

First reaction. "Kill". I didn't though.

Why, I wondered, is our first reaction always to kill this magnificent beast. This symbol of the  creative spirit. This unfairly cast character in Adam and Eve's  play. This most exquisitely  patterned primordial piece of living rope. This silent slitherer.

The Adam and Eve sneaky seducer comes to mind, but only as a childhood story. However, as that, it may even be stronger than fiction.

I am not by nature aggressive and there was nothing to defend. I wasn't afraid of it in any way. A  little weary maybe, but not afraid.
In my case 'Fear' would have to apply to the meeting with the snake. Fear in relation to failing to understand. I don't know the particular ways of this marvellous mover. All I know about snakes are the indoctrinated and scary stories, whether they are from the biblical times of my childhood and therefore very strong, or more recent from anyone else, real or made up.

That is another consideration. Most stories based on fear are not only exaggerated, but also largely  made up. In relation to snake stories, that would have to be the case.

I slowly stepped back inside my studio to consider all this and, after considering, decided to try  and understand. To try and learn about the snake. After all, it is only early spring and I had a long snake time to come yet.

I have stated that 'Learning is the best healer' in my blog before.

First I re-looked at my 'snake history'. I started my life in Australia at Bonegilla, where the  authorities scared us with horror stories about snakes and spiders. Following this my first job was on a farm in N.S.W. It was hot and there were many snakes. I was taught how to  kill them. Effectively. Next I moved to the city of churches, Adelaide. The only snakes I had to watch
out for there were of an entirely different kind. After a short stint in the city, for my education, I  returned to the country, the Flinder's Ranges in fact. There on the very day I moved into an old farm house I found a snake moving in at the same address. I didn't ask its name, nor did I introduce  myself. I killed it. Afterwards I wondered why that made me feel awful.

Many years  have past and a lot has happened. I have learned a great deal and one aspect of this learning has been 'tolerance'. Since moving into the forest, locally, I have hardly ever seen any snakes. Yet there are plenty around. Maybe I don't give them any attention.

What I have been giving  attention is the idea of Man/Animal relations in a place such as this forest.   There is an animal, it doesn't suit me, BANG. Kill it. It begs the question. Doesn't  any animal has as much right to live on this patch as we have. Probably more so. It has been here much, much longer.

What is it with this white man attitude? I know, the problem with most animals is that they don't understand that they need to claim their bit of real estate by going to the Council and obtain their claim with a proper document, like us, superior beings. Then they would be able to do what they liked. Shoot things, poison stuff,  take wood, the whole catas-trophy. Trophy?

After these thoughts ran through my head I still had to deal with the snake. My 'concept' of snake,  which is different to a real one. I took off my glasses labelled 'Fear' and sat down near the snake. I  talked to it. I explained that we could live together but that there were certain rules. Easy. I sat and talked to it quietly for a long time. I was able to get quite close. There was no reason for it  to attack me nor for me to  kill it. In reality there hardly ever is. I have shown it the respect it deserves and now we will work on sharing this space, on living together. 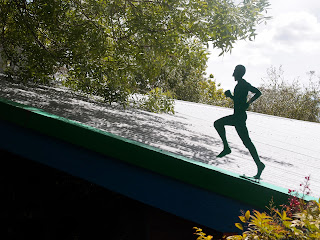 i have been spring gardening over the last while
filling my veggie patch with colour,
creating an annual edible artwork.
this was followed by a dream.....