for the NGV collection 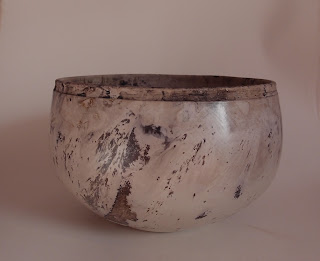 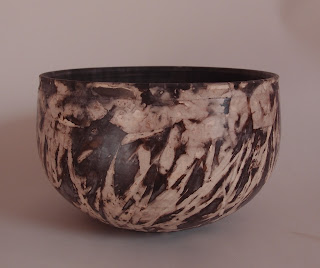 series: the magic of the forest
title: 'layers of leaf matter
layers of history'
These two bowls
have been selected
by the NGV
for their collection 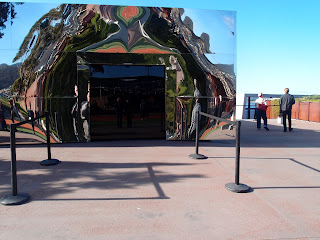 I went to visit Mona, I now believe in GOD.


After running the gauntlet of ‘stuff you don’t need’ at the airport. After being shot at high speed through clouds into a soft blue space. After landing with a slight rumble onto the tarmac at Hobart, we were ready for Mona.


Where does one begin with this amazing and magical place. I suppose at the start would be good. A ferry ride up the Derwent river to the Mona landing followed by 99 steps took us to the entrance. A wonderful way to arrive. However, before we entered the Museum of Old and New Art there was much to see outside. Set in a frame of heavy slabs of rusted steel, a border with the outside world, we wandered and wondered from one art piece to another.


A larger then life cement truck created from waste sheets of rusted steel welcomed us into the land of magic and wonder. Wandering on we found ‘Chapel’, a building created from similar rusted steel by the same artist. ‘Exquisite’ comes to mind. Next, a huge slab of aluminium, suspended in the sky, has a square hole cut in it. I sit below it and view a framed aspect of the sky. This simple but strong and beautiful work seems based on the concept of the Zen view.


Time to enter the museum. Two doors of black glass, situated in a wall of mirrored metal, slide silently open into the entrance and the world of magic. The magic of art, the magic of architecture, plus the magic of both brilliance and madness combined. One takes a circular lift into a subterranean world and lands into a space, I imagine, not unlike that of Alice in wonderland. The first artwork to be experienced, besides the astonishing architecture, which, by the way, reminded me of being in an Egyptian pyramid, was a work where water dropped from a horizontal pipe and in that dropping created words. One word after the other dropping from above. Random words. Readable rain. A mesmerising work.


Between this work and the last, which was a full size Porsch, manufactured in fire-engine red plastic, (Imagine this car blown up and becoming very fat,) were many truly fantastic works to be enjoyed, to marvel at and be surprised by. Works such as an eerie room, like a tomb. You walk on stepping stones, set in black water, towards a platform with two coffins, one with a mummy and one with video of the same mummy, which slowly reveals the inside of the mummy. So, in time, a skeleton is revealed. A powerful piece. In another space, on a black wall is a line of 77 3d white porcelain prints of vaginas. Each one different. Then there are numerous multimedia works and video installations. Plus throughout, special pieces of ancient art. One wonders where David Walsh, the creator of Mona, got these treasures.


There was a clue when after a day spend in the museum, I once more wondered around outside and found his reserved car park. It stated in big bold letters ‘reserved’ ‘GOD’, with a slick car in front of it. GOD was home. Next to this was an equally shiny Mercedes with the words ‘reserved’ ‘GOD’s mistress’ on the wall.


That is why now, after visiting one of the most amazing museums I have ever experienced, I believe in GOD. Go and visit Mona. You haven’t lived until you do. You may even get a glimpse of GOD if he isn’t gambling somewhere, that is, to make more money to finance his wonderful museum.